The JS Flying Pony still maintains it’s prowess as a tiny wave groveler – it easily catches the smallest, weakest of waves – but subtle tweaks to the nose and tail, the foil and bottom contours make this Flying Pony feel much more loose and lively than I remember of the Pier Pony.

Have a question? Let’s chat in the comments and don’t forget to LIKE – SHARE – FAVOURITE and, if you haven’t already (naughty you), SUBSCRIBE to get the latest each week from Benny and the team.

Have a question? Wondering if the JS Industries Flying Pony Surfboard model is the right board for you? Let’s talk about it in the comments…

Want the latest reviews and updates direct to your inbox? Subscribe Now.

+ Performance tweaks make this a more versatile small wave board vs. the Pier Pony
+  It’s more sensitive, and feels a lot more like a regular board in tiny surf
+  It still has ample foam to give you great paddle power, and a huge amount of speed down the line.
+ These grovelers are just getting better and better as in they’re getting more and more maneuverable.

– It doesn’t like anything that’s too steep and definitely not hollow. Likely waist high and below

Standard JS Industries Flying Pony Surfboard dimensions and volumes may be found at the bottom of this page.

The best wave type is a flatter faced, small, weak waves. Anywhere from up knee to stomach high. It can be surfed a bit higher, but it would need to be a flatter faced wave. It’s just too wide and too flat of an outline to handle steeper, hollower waves.

Hey. This is Ben. This is Benny’s Boardroom, of course. This is the place where we buy, ride, and review surfboards. This is the JS Industries Flying Pony. This is the progression of a couple of different boards by JS. The original Pier Pony, which was kind of their first really directional short, wide, fat, flat groveler board. Then they had a Show Pony, from memory, which I think it’s surf.

My JS Industries Flying Pony is 6’0 x 22 1/4 x 3 at 45.5 L’s. It has a lot of foam. This would be right at the top end of my volume range but, again, I think these boards are better bigger because you want all the foam you can get so that you can get up and get speed when the waves are really tiny and crappy.

I wanted to surf the six  because I had the six Pier Pony before and I wanted to have some point of reference. I wanted to know how it was going to feel relative to the Pier Pony. The Flying Pony has a few tweaks over the original boards. The tail is a lot tighter than the Pier Pier Pony. It’s mostly achieved by these little double bumps here.

You can see that this is almost reminds me of the lost RV a little bit but these double wings right here pull the otherwise very, very big outline down into this kind of tighter tail. There is more foam underneath the chest area so the foam’s actually been redistributed up front because this board is intended to be surfed in tiny, really nasty, small, weak waves.

These boards, I call them tiny wave broad boards, they are intended to get you up and get you going and get you having fun when it’s really small.

The nose, I feel, is a little bit tighter than the Pier Pony as well. It’s a little bit more pulled. It has a little touch of curve. You can see this board is almost completely flat throughout. It has very little rocker so there’s going to be less friction when the board’s flying through the water, which is what you need when it’s tiny and small. There is a deep single concave through the front of the board and that comes to quite a subtle double concave and a very subtle vee at the back.The flying pony have fuller rails but they’re not too thick. The board overall doesn’t feel as bulky as my six Pier Pony felt.

Overall, I think if you’re looking for a board in the summer in some waist high, knee high, really small, crumbly, grovelly surf where a lot of the times before these types of boards came out you would just pack it in and go home.

These boards are really fun and fast in those conditions. This is one of the better ones I’ve tried. This is a great iteration, I think, from JS for this type of board.

The Pier Pony to me was great. Super fun and fast in smaller waves, but did handle things that were a little bit bigger. I surfed a few days that were kind of flatter faced, head high, even over head. The Pier Pony handled it and that was great. I really like that about the board.

My only real critique of it is that it felt stiff, quite stiff in the back and I had a very big Pier Pony.This is a very big JS Industries Flying Pony. I probably could have surfed it down a little bit. I generally don’t surf boards below five-ten so probably a five-ten is what I would have chosen.

This board definitely feels a lot looser than the Pier Pony did. Not loose, but I could actually turn this board. I surfed it a couple of times in knee to waist high running walls but really flat faced. You wouldn’t be able to surf very many other boards.

I felt really nice on my backhand. Like I couldn’t believe how easy I could turn and hit the lip on my back hand. It definitely does have a better performance tune feel about it. I still wouldn’t take this board and surf it in anything too hollow or steep or critical. The outline’s just too big. It’s too flat. It’s just not made for that.

For the fin setup, I surfed these FCS2 stretch quads. These things are dynamite. I’ve had stretch quads in the features before. They’re one of my favourite quad setups. This version is just as good as the stretches that I remember before. I felt it was really great in this board.

It complemented well. The guys at FCS recommended these stretch fins. It would be almost impossible for me to choose a thruster to surf in this board so I went straight for the quad. Those stretch quads by FCS2, I think they work really well.

They’re still maintaining a lot of foam that allows you to get up and get going in really, really tiny, weak surf but they are getting more lively and manoeuvrable. The trade off of going to this are very, very small, fat, wide, flat outline, I think its getting mitigated as the shapers learn how to tweak this style of board.

The bad is, this is not a board to be surfed really above kind of waist, maybe stomach high. You can surf it slightly bigger waves, but I definitely lean more towards the flatter wave faces. That’s just not the point of it. Again, this is a very directionally small wave board. Everybody should have something like this in their quiver.

I don’t know how people get by, especially around like southern California in the summer and Sydney in Australia’s east coast, where the waves are often quite weak and small even in the winter, but definitely through the summer. If you do try one of these on a smaller day I think you’re really going to fall in love with the feel of it and you’re going to want one.

This is the JS Industries Flying Pony. A great board by JS. Great evolution of the Pier Pony, which is one of my favourite grovelers and this one is even better so well done, guys.

Thanks so much for watching. Have a happy holiday and I’ll speak with you again soon. 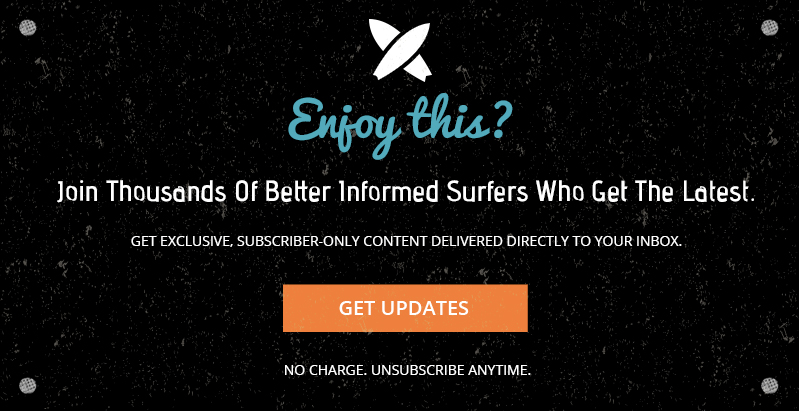 My name is Benny and I have a surfboard problem. Join us on our journey of riding and reporting on the best boards we can find from the best shapers (both big name and underground) on the planet. Subscribe to the newsletter

Latest posts by Benny (see all)