Even for a seasoned shaping veteran like Matt Calvani of Bing Surfboards, the path to creating a new design is not always a straight one. Matt shares his trials and tribulations in the seemingly simple task of evolving the über popular Bing Dharma into a more versatile Dharma 2.0.

Our connections to the brands of boards we ride can begin long before we actually sample the goods. I liked the look of Bing Surfboards from the first longboard I saw long ago and Taylor’s The Shop Next Door in Manly Beach, Sydney, Australia. The vintage looking logo, the beautiful colours, the elegant lines…but it was years before I actually surfed my first Bing, the Dharma [See the review…], which – as fate would have it – turned out to be one of my favourite boards ever.

Riding Bing Surfboards makes me feel like I have more style and grace than I do! Talking to Matt Calvani, owner and head shaper at Bing Surfboards, it’s easy to understand why. An enormous amount of thought, testing and experience goes into Matt’s shapes.

When it came to the ‘My Favourite Board’ series, Matt Calvani of Bing Surfboards was one of the first shapers I reached out to. I couldn’t wait to A) meet the man behind the brand and B) see what he was actually riding.

Matt’s interview was candid and telling of a master craftsman who settles for nothing less than perfection in the craft he creates. Enjoy! Matt: Hi, my name is Matt Calvani and I’m from Bing Surfboards. I’m going to talk about my favorite board.

Right now my favorite board is the Dharma 2.0. Basically it evolved from the regular Dharma. The regular Dharma is one of my bestselling boards, one of my favorite boards, but after riding it for so many years I saw some drawbacks mostly in the bigger, hollower-type waves so I really wanted to keep that paddling and the advantages of the Dharma but increase the high-end, bigger wave spectrum. So, I basically went on this journey to create this board.

At first what I did is I basically pulled in the tail a bit, pulled in the nose quite a bit, and then added more rocker. I thought, well that’s it; it’s as simple as that. Well, after riding it – I left the thickness, everything the same as the original Dharma – it just didn’t work.

“It still worked on the lower end but it wasn’t accomplishing what I wanted on the higher end as a surfer.”

I went back to the drawing board and needed to refine the outline and I ended up pulling back the wide point and thinning it out and doing some other things to it. It took me about five or ten times of making one and riding it myself to figure out what is it that makes a board ride in overhead, hollow surf. In this board, I really think I accomplished that. Inside Bing Surfboards – View from the Office

I think one of the elements is the volume is really key, and the other thing is the outline. The outline is really refined. It may seem like another small [00:02:00] wave board but it has a lot of thought put into it. Basically what it is is the nose is pulled in still. That part I got right, but this tail was really key to keep it a long rail line so basically when you’re really laying into a turn you can hold at high speeds and in hollow waves and it still wraps. With the square tail it still wraps and hits the lip really well and rotates. It tube rides awesome and it’s been proven in Indo and Maldives and all over the world. It’s been around and I’ve surfed it in tons of conditions and I’m really surprised at how well it works in the bigger waves. What I set out to accomplish, make a board that’s got the largest range in my line of two feet (waist high) to three feet overhead, is this board. I can confidently say that.

A couple of design elements that make this board unique is that it has a concave deck. It basically has your feet closer down to the water. It has a flatter deck so it’s more sensitive, and on the bottom contour is a single concave going into a double, which is really like a modern shortboard. It has a lot of elements that make it really sensitive when turning for how wide it is. If you think about it, on the small end of the spectrum like the original Dharma, it’s got all this width. When you’re going on those two foot mushy waves, it just plains across and just keeps going. You got all that speed and you’re set up as a quad fin. That’s key too for the speed and the control. I’ll get into that in a second. Inside Bing Surfboards – Blanks Waiting to be Transformed

Then on the bigger waves it’s just this long rail line with the squared-off tail. [00:04:00] Basically you can just drive off that rail and that’s super-key for when it gets bigger and hollower. Just enough rocker in the nose so you don’t end up pearling and you’re still maintaining that really easy entry of catching waves. This thing catches waves like amazing. That’s the advantage: you can be out in a crowd with a bunch of longboarders and mid-lengths and everything and you’re getting as many waves as you want. You can keep up with a lot of those guys out there.

As far as getting back to the fins, the reason why it’s crucial that it’s a quad is basically the quad is the fastest fin setup besides the twin fin configuration. The reason why I don’t make it as a tri-fin is there’s just too much distance from this fin to the center fin. Basically you’d be up on a rail and tail’s so wide you’d just be riding up one fin. It would just slip out. I don’t even put a back box in these. I don’t put nubsters in or anything;

“It doesn’t need it because the rail line is really the key.”

Also, the key too is the thickness in the rail. It’s really thinned out and that makes it able to sink and penetrate the water at high speeds and have a lot of control. The squared-off tail, it just gives you that release and that square turns so you can react and get back into the pocket quickly. This little swallow tail, I guess you could call it, or notch, it kind of splits the board in two. Basically you’re riding one half of the board or the other at one time. That’s essentially what quads do. A wide tail isn’t really affecting it when the waves get bigger, but yet, again, you have that surface area for when it’s smaller.

That’s the Bing Dharma 2.0 and that’s why it’s my favorite board.

OUTRO: After watching this video I wanted a Dharma 2.0 immediately. Did You Like This? Subscribe Now to Get Real Surfboard Reviews, New Model Alerts and Updates Each Week 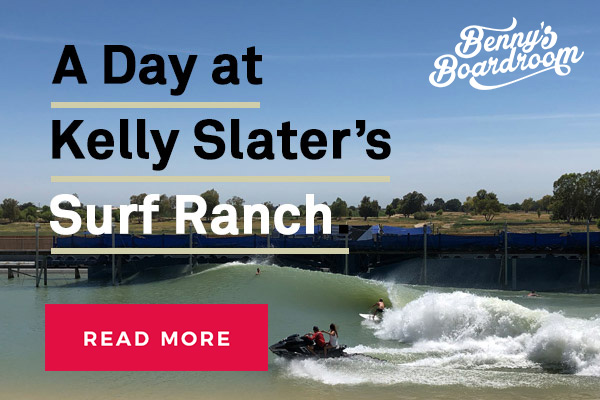